Discover exactly what “whole wheat” bread, types of milk, sugar, and vegetable oils do to your body…

You often hear vague claims in the news that "sugar is bad for you" or that "wheat and gluten are bad for you", but do you truly understand what these foods do to your insides?

Most people DON'T understand the reasons... ...and the fact is that some of the foods I listed above can not only DESTROY your hormones and metabolism, but may also CAUSE heart disease, type 2 Diabetes, Alzheimers and even cancer.

The 3 reasons you should NEVER eat wheat - even "whole wheat"

These nasty little compounds called AGEs speed up the aging process in your body including damage over time to your organs, your joints, and of course, wrinkled skin.

One of the biggest factors that increase production of AGEs inside your body may surprise you, but high blood sugar levels - over time dramatically increase age-accelerating AGEs in your body. This is why type 2 diabetics in many cases, appear that they have not aged well and look older than their real age. But this age-increasing effect is NOT just limited to diabetics.

Here is a little-known fact that's often covered up by the massive marketing campaigns by giant food companies that want you to believe that "whole wheat" is healthy for you... ... But the fact is that wheat contains a unique carbohydrate not found in other foods called Amylopectin-A, which has been found in some tests to spike your blood sugar HIGHER than even pure table sugar.

The blood sugar test results of wheat versus oatmeal: -

Blood sugar increased from 86 fasting level to 112 As you know now, the higher your average blood sugar levels are over time, the more AGEs are formed inside your body, which makes you age FASTER. 155 is a massive blood sugar reading that will certainly contribute to faster aging if you eat wheat frequently... and most people eat wheat without even thinking about it at almost EVERY meal.

Not only that, but the high blood sugar spikes caused by wheat also makes your body pump out more insulin which makes you pack on more body fat... Not fun at all !

These massive blood sugar spikes from eating wheat daily also cause damage over time to your blood sugar regulation system, harming your pancreas, causing insulin resistance and eventually causing type 2 Diabetes. I think we have a strong case against eating so-called "healthy" wheat!

Reason 2 -- Gluten and other gut-damaging compounds

The topic of gluten is on fire in the media lately...but most people are confused as to whether there's any real health risks with gluten for the average person that doesn't have Celiac disease.

The truth is that even if you are not officially "gluten intolerant" or "gluten sensitive", there are hundreds of published studies that indicate that gluten can cause inflammation in your digestive system, and even cause "permeability" in your gut, which can lead to a health condition that's on the rise lately called Leaky Gut, as well as other digestive issues and auto-immune problems.

Scientists theorize that the reason gluten is causing these digestive system problems is due to the excessive hybridization of wheat over the last 50 years, which has created newly modified gluten molecules that are foreign to the human digestive system compared to the ancient wheat that humans ate for several thousand years historically, and even compared to the wheat that your grandparents ate 50+ years ago.

The third reason that wheat is terrible for you is that it contains what's called "antinutrients", which are naturally occurring compounds in the wheat plant, but can cause undesirable effects in humans that eat too much of them. One of these antinutrients is called phytates, which blocks the absorption in your body of certain minerals like zinc, iron, manganese, and calcium if you eat wheat too often.

Again, most people eat wheat with almost every meal (cereal in the morning, bread on sandwich at lunch, and pasta or bread at dinner), so this can cause a mineral deficiency in your body over time that leads to many health conditions.

Wheat has other mineral blockers and anti-nutrients aside from phytates, such as lectins. Lectins are another constituent of wheat that causes gut irritation. Yet another reason to minimize or eliminate wheat from your diet. There's absolutely nothing "essential" about wheat in the human diet...It simply does more harm than good...period.

Many people often ask me... "But what about the FIBRE in wheat? I thought that's why it's supposed to be healthy?"

Sorry, you can get ALL of the fibre you need from fruits, veggies, and nuts, without the digestive system damage and massive blood sugar issues that are caused by wheat.

The 3 reasons you should NEVER use Vegetable Oils...

Although vegetable oil has a healthy sounding name, it's NOT made from vegetables...As you might already know, vegetable oil actually comes from any combination of corn oil, soybean oil, canola oil, safflower oil, and/or cottonseed oil, ALL of which are absolutely terrible for your health.

Reason 1 -- Vegetable oils usually contain deadly trans fats, even if non-hydrogenated You already KNOW that trans fats are deadly, so I won't go into all of the science as to why trans fats kill you and DAMAGE your cell membranes in your body...leading to all sorts of scary health problems like cancer, obesity, Alzheimers, heart disease and more.

Knowing these facts, I'm sure you already know to stay away from foods that contain partially hydrogenated vegetable oils. You've heard that a million times before.

However, what you probably DON'T know is that even non-hydrogenated vegetable oils (all vegetable oils are refined) also contain some trans fats due to the extremely high heat, solvents, and pressure they are exposed to during the refining process. And yes, this includes so-called "expeller pressed" vegetable oils as well.

All of this high heat and high pressure processing along with the use of hexane solvents actually forces some of the polyunsaturated content of vegetable oils (yes, even so-called "healthy" canola oil) to be transformed into trans fats and something even worse that we'll talk about in a minute called "MegaTrans".

According to Dr. Mary Enig, PhD, and Nutritional Biochemist, "Although the Canadian government lists the trans fat content of canola at a minimal 0.2 percent, research at the University of Florida at Gainesville, found trans fat levels as high as 4.6 percent in commercial liquid canola oil".

All vegetable oils contain oxidized fats due to the refining process and chemical reactions with the polyunsaturated fat content of vegetable oils. Expert Nutrition author, Catherine Shanahan, MD, calls the fats in vegetable oils "MegaTrans", because they are similar in chemistry to trans fats, but even WORSE.

And MegaTrans from vegetable oils are found in almost ALL processed packaged foods, as well as virtually ALL restaurant fryers.

French Fries proven to immediately harm your arteries after eating them:

Free radicals formed during the refining of vegetable oils create these "mutant" fats, which damage your cell membranes & chromosomes, and create massive inflammation in your body.

The free radicals in vegetable oils also damage your arteries, which can directly lead to a heart attack. Please be aware that this isn't just a long-term risk of eating vegetable oils daily. There are also studies that show immediate dysfunction in your arteries, also called endothelial function.

This is one thing that can cause a heart attack. -

Dr Shanahan also surveyed hundreds of patients that were admitted to the hospital for a heart attack, and discovered that every single patient that just had a heart attack had consumed foods made with vegetable oils with their last meal before the heart attack...Scary huh!

Always ask to replace french fries that come with most meals with side veggies, fruit, or a salad instead. That may very well be the difference between dying tomorrow or enjoying many more years on this beautiful planet.

The healthiest ratio from the scientific literature appears to be a ratio of 2:1 or even 1:1 for your omega-6 to omega-3 ratio. However, most vegetable oils skew your ratio as high as 20:1 or even 30:1 in favour of harmful inflammatory omega-6 fats.

And worse yet, these omega-6 fats are NOT the innocent type found in nuts, they are the "mutant" damaged MegaTrans type that harm the tissues of your body.

This Omega fat imbalance can be YET another reason why vegetable oils lead to heart disease, cancer, obesity, and many other degenerative diseases that WILL shorten your life significantly if you don't cut out the vegetable oils ASAP.

As a quick note, the solution to all of these major problems with vegetable oils is to use healthy oils like coconut oil, olive oil, macadamia oil, avocado oil, and grass-fed butter, all of which are MUCH healthier than vegetable oils and don't cause any of the problems we've described in this section of the article.

You've heard a million times from health experts, bloggers, and on the news that sugar is terrible for you, but most people don't truly understand WHY it's so bad...

In fact, most people falsely think that if they eat sugar, they can just exercise a little bit harder that day or the next day so they can "burn it off"... Unfortunately, that kind of thinking will lead you to an early grave.

It's not as simple as just "burning off sugar"...It's about what sugar does internally to the cells of your body, and how sugar gums up your internal workings, causing disease.

If you knew exactly why sugar is so bad for you and exactly what it does to your cells in your body, I promise that you would think twice about eating that piece of cake, candy, sugary soft drink, fruit juice, or ice cream, or feeding them to your children.

Here are just a few of the reasons that sugar is killing you...

Of course, you already know that sugar makes you fat, and gives you excess calories without any beneficial nutrients whatsoever.

To clarify, when we talk about how much damage sugar does to your body, we're NOT talking about tiny amounts such as having 5 grams of sugar from a teaspoon of honey in your tea... Small amounts of natural sugar like that are not a problem.

The REAL damage occurs when you eat that piece of cake and ingest 40-50 grams of sugar in one sitting, or that bag of candy with 35 plus grams of sugar, or that soft drink with 45 grams of sugar or more... Or even that so called “healthy” commercially made smoothie that contains a whopping 80 grams of sugar because of all of the fruit syrups used in them.

Now that you know why sugar, wheat, and vegetable oils are killing you and your family, maybe you'll think twice about eating cereals, breads, bagels, muffins, candy, and processed foods or fried foods from restaurants that are cooked in vegetable oil. 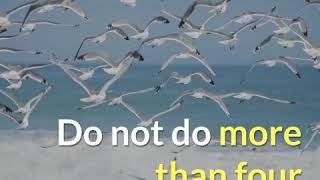 Why have I lost my confidence

In The Stirrups - Sherree Russell talks about equestrian hypnosis

Hypnosis can improve your riding confidence